Javier is passionate of community-integration initiatives and he believes sports, in particular soccer, offer a great tool to empower children and communities. His experience working with children started in the 1990’s as a monitor at summer camps in Mexico City, his home town. Javier moved to Toronto in 2007 and since then he has been collaborating in various community-oriented initiatives, including soccer projects, charity events, and young professionals career development. Javier strongly believes that providing children with access to education, sports and arts at low cost contribute remarkably to make conscious citizens, lovely friends, and successful professionals. He graduated as a Biologist from the National Autonomous University of Mexico, whose representative teams have always been his favourites: Pumas UNAM! 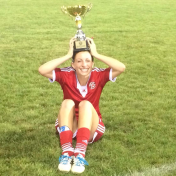 Alicia has been playing soccer since the age of 8, and played competitively in the CGSL, OYSL, and OWSL with Vaughan Azzurri. She now plays competitively with the Islington Rangers at the Premier level in the Toronto Soccer Association’s Women’s Division Soccer League. She began coaching with a 10-13 year old recreational co-ed team at Sorauren Park in 2013, where she discovered her love and passion for coaching children. In 2014, she began her rep coaching journey as assistant coach with SC Toronto’s U11 girl’s rep team, and is now absolutely delighted to be assistant coaching the SC Toronto 2003 Girl’s Ontario Player Development League (OPDL) team. Her growth mindset motivates her to continuously build knowledge and capacities to coach as well as share her knowledge and learnings with newer coaches! Alicia’s personal goals with respect to soccer are to harness the unifying and transformative power of the game to help develop young leaders. She studied at McMaster University and the University of Toronto and holds an M. Sc. in Exercise Sciences. Alicia holds Learn to Train (U9-U12) and Soccer for Life (U13+) NCCP recognized Community Coaching Workshop coaching certifications, and will soon be in training for the C License.   Fave team: Man United! 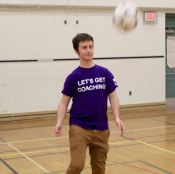 Jon was born in England but moved to Toronto in January 2008, his love for soccer and its power to unite people has led to many new and wonderful friendships. Since moving to Canada Jon has started his own family and now his 3-year old daughter shares his passion for soccer. He has played in and organized many soccer tournaments for both local and international charities. Jon’s personal values with respect to soccer are to always demonstrate respect, fair play and honesty and to make sure everybody has fun! Jon has gained coaching experience with Royal York Soccer Club and Oasis Community Centre, which led to a desire to inspire people to achieve their goals on and off the pitch. He graduated from the University of Edinburgh with a PhD in Biology and now works at the University of Toronto. Fave Team: Norwich CIty!

Caitlin is a proud west coaster, where she grew up playing soccer outside all year round, often in the rain. She loves the versatility of football, and how there’s always an opportunity to become a stronger, faster, and more well-rounded player. As a natural born fullback, Caitlin is big on the belief that defence wins games – but she definitely appreciates a beautifully executed goal as much as the next girl! Caitlin is so excited to support the development of the next generation of soccer players at NUTMEG, and she is proud to be part of a team that believes in the power of football to build skills both on and off the field. Caitlin is inspired by the inclusive atmosphere that NUTMEG has created, and she looks forward to working with players of all genders every week! Soccer is for everyone, and NUTMEG has been established to promote this message. Let’s hit the field!

Growing up in London, England, Alexander’s love of soccer started at about six years old and has only got stronger over the years. Since moving to Toronto in 2006 for university, he’s been excited to see the visible growing popularity of the game in Canada.
He graduated from and now works at the University of Toronto, and co-hosts/co-runs a soccer website and podcast in his spare time. You can hear him talking English, European and Major League Soccer every week on The Coshcast!
After finding out about NUTMEG from a poster on McCaul street, Alexander has loved helping to coach the kids and pass on his enthusiasm for the sport, and believes strongly in the value of free sports and social programs. 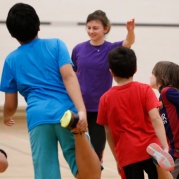 Alex discovered soccer at around the age of 6, and grew up through various competitive clubs and player development leagues in the Greater Vancouver Area, including competing in the BC Summer Games. After a short hiatus from the sport, she returned to it recreationally in 2009 in Toronto, and now plays competitively in the Premier Division of the Toronto Soccer Association’s Women’s Division Soccer League (WDSL), with the Islington Rangers. She will soon have completed the Soccer for Life NCCP coaching certification, and will also begin coaching for the East York Soccer Club. Soccer has been and continues to be one of the most valuable and transformative parts of her life, and she wants to share that passion with NUTMEG kids taking up the sport for the first time, as well as those developing their skills. She thinks it’s important for young girls and boys to grow up with athletic female role models, and for all young people to feel they are able to realize their athletic potential. When not doing soccer-related things, Alex works for the Centre for Teaching Support and Innovation at the University of Toronto, as a teaching assistant peer trainer, and teaches and does research in the Department of Linguistics at the University of Toronto, where she is a Ph.D. candidate currently completing her doctorate in theoretical linguistics. She also holds a B.A. from McGill University and an M.A. in Linguistics from the University of Toronto.